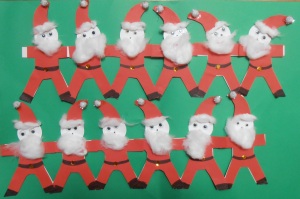 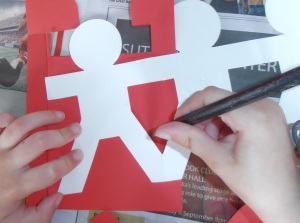 Step 2 –  Place the outfits onto each Santa to make sure that they fit then glue the six Santa outfits onto the dancing Santas using a glue stick.

Step 3 – Fold the red paper once again in a concertina (in threes or six)  then draw a Santa hat on the red paper and cut it out. You should now have six Santa hats to stick onto each Santa head. Glue each one on with glue stick. 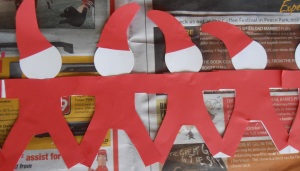 Step 4 – Draw on some Santa boots with a black marker.

Step 5 – Using a black marker, draw a black belt on each Santa in a curve so that it looks like a jolly Santa belly.

Step 6 – Make a fluffy Santa beard using some cotton wool and glue it to each chin with PVA glue. 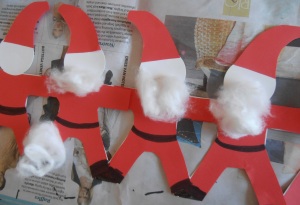 Step 7 – Use PVA glue to add a gold sequin on each belt as a belt buckle. 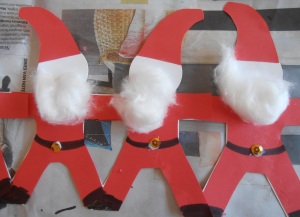 Step 8 – Add some googly eyes (with PVA glue) to each Santa’s face.

Step 9 – Add some cotton wool to each Santa’s hat to make the fur trim.

Step 10 – Glue a tiny pom pom onto the tip of each Santa hat using PVA glue.

Your Dancing Santa’s are now ready to dance!

Happy Guiding and Many Blessings for the Christmas Season,